The ski area Černá hora is out of operation. The cable car as well as the T-bar lift are in operation again from Friday 2.12.

Černá hora sledging track has been in use for more than 100 years. You can give it a go during the day or during the night with a headlamp and a professional guide.

Živě
Sledge track is out of service 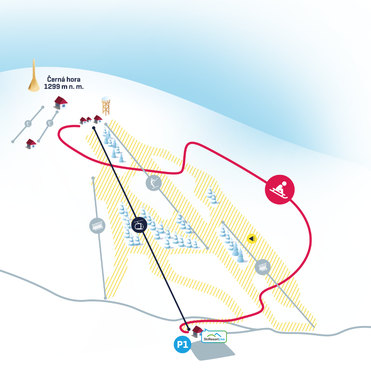 The route of Černá hora sledging track meanders along a beautiful hillside of Černá hora with views of Klausův důl. The track is 3.5 km long with height elevation of 560 m.

The starting point of the sledge track is located at the top station of the cable car on Černá hora, at the crossroads below Sokolská bouda. The track crosses the ski slopes four times; at these points you have to dismount your sledge and cross the slope on foot. When approaching Janské Lázně, please do not use the bridge for skiers but the underpass under the road. The entry point to the underpass is located left to the bridge. The track finishes at the bottom station of the cable car.

The sledging track is open daily between 9 a.m. and 4 p.m. depending on the snow conditions. For current schedule check the top of this page.

Daytime sledging is free of charge and at your own risk. While using the sledging track, please pay attention to the following rules of conduct.

If you wish to take part in guided night sledging, you have to book your place online and by 3 p.m. on the day of the trip. This is a paid activity.

The main sledge rental SkiResort Live is located on the first floor in the building of the bottom cable car station in Janské Lázně; the second one at the top station of the cable car on Černá hora.
Rental fee is 250 CZK / day

Night sledging with a guide from SkiResort Live

A different kind of adrenalin you won't be able to experience elsewhere. Try 3.5 km long guided night sledging with headlamps.
Book your ride in the office of ski school Live in the building of the bottom cable car station in Janské Lázně or online. Reservations for a given day must be made by 3 p.m. at the latest.

Minimum number of participants is five. The price includes cable car fare, sledge rental fee, headlamp and guide. Night sledging is not suitable for children under three years of age. We recommend taking a ski helmet and goggles. 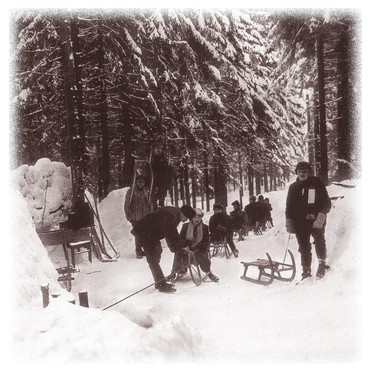 The history of the sledging track

The sledging track from Černá hora to Janské Lázně goes through places where horn sledges travelled  100 years ago. The name "Zvonková cesta" (zvonek = sleigh bell) comes from the times when sledges were equipped with bells to warn other passers-by.

Sledging has a much longer tradition in the Giant Mts. than skiing. Mountaineers used sledges for transportation of hay as early as the 16th century. 300 years later tourist started using sledges for entertainment. However, instead of horses to get you to the starting point of the sledging track you will travel from Janské Lázně in a modern cable car. 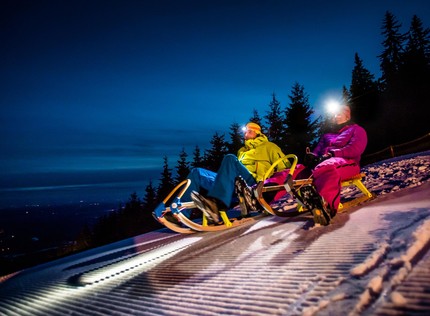 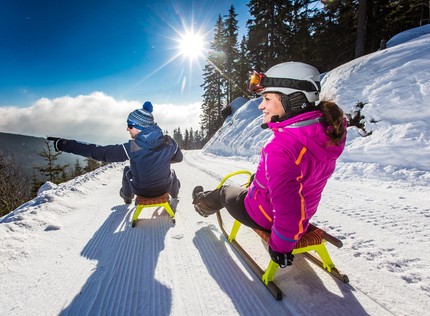 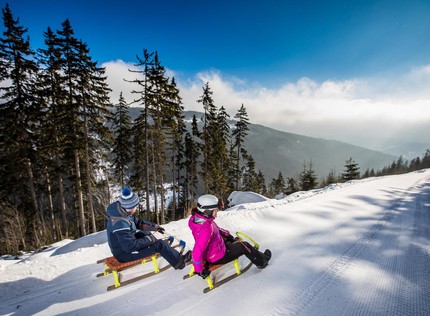